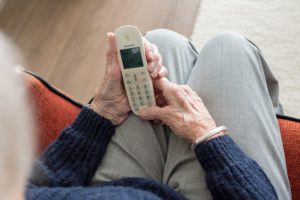 What our phones really mean to us: a direct line to those we hold most dear

Irene is in her 80s. Her husband, John, died recently after a long illness. Irene had been caring for him although she’s not in the best health herself. So when John died Irene was exhausted. Her family all live close by though and felt confident that if Irene needed them all she had to do was pick up the phone and they could be with her in minutes.

Along with dreadful loss and sadness, death, unfortunately, also creates a lot of admin. As Irene had never had a mobile phone, one thing her family wanted to do quickly was secure her BT landline. So her son called BT to let them know his father had died and asked them to transfer the account to his mother’s name. No problem, he was told.

Except that evening, when Irene picked up the phone to call her daughter, she found she had been cut off. And because BT were unable (or unwilling?) to immediately reconnect her, Irene’s family had to go to the expense of buying her a mobile phone. And Irene, tired and grieving, had to deal with yet another change in her life. At a time when Irene was already vulnerable, BT unwittingly made her even more so.

What our phones really mean to us

Notice how above I said BT were unable to immediately reconnect her. Not reconnect the line. But Irene, a person. Because that’s what our phones do. Connect us to each other. To our families and friends, to our GP, district nurse and all the other people and services we depend on.

We also depend on what’s familiar, often without realising it. We know how to use our oven, our boiler and our television remote controls. All these familiar tools make us feel safe and comfortable and help the rest of our lives run smoothly. So Irene having to get used to a new phone upset her at a time when she already had enough upset to deal with.

Ironically, this familiarity may be why BT continues to survive even though its reputation for customer service is so poor.

BT is a telecommunications company. They say they use the power of communications to make a better world. And that they connect people to what matters to them, wherever they are. In general, BT offers good products at a competitive price. As long as nothing goes wrong they appear to be an attractive company. But when something does go wrong BT seem woefully unable to deal with it.

One online review called the company, ‘fractured and incompetent.’ Another said, ‘For a company as big as this, customer service should be their number one priority.’ There are plenty of mentions of people being transferred from department to department and the feeling that no-one actually knows what their job is. People seem to find dealing with BT hard work, time consuming and very stressful.

Yet BT has been around for 50 years, and their origins date back as far as 1846. They are a wealthy company with 18 million customers in the UK alone and operations in around 180 countries worldwide. You’d think they’d know what they were doing. So why on earth do they get their customer service so disastrously wrong?

Do not put your customers first

The most profitable and sustainable businesses are driven by loyal customers. These customers are loyal because they are happy with what the businesses do. With their products and, crucially, with their service. And this highly valued, and therefore high value, service is provided by satisfied, and therefore productive, employees.

So to provide high value customer service you should put your employees first. Think about what they need and want, both as people and as the beating heart of your business. Think about the processes that will help them. Finally, think about how technology can best support these processes so your employees can create the best experience for your customers.

In 1990, Sasser and Reichheld, two business professors from Harvard University, carried out some research. From this they estimated that a 5% increase in customer loyalty can directly lead to an increase in profitability of between 25% and 85%.

So the order in which you should prioritize is people, process, technology. Yet far too few businesses do.

BT definitely seem to have their priorities the wrong way round. From the outside looking in I would say their processes and technology get in the way of effective communication rather than enabling it. It looks as though they planned their business around what makes life easier for them internally, with a focus on technology and process at the expense of the human experience. They seem to have forgotten they are in the business of connecting people. That they are a business run by people for people.

Perhaps in response to this, in 2018, BT announced they were axing 13,000 management and back-office jobs in a bid to cut their costs. At the same time, they said they would take on another 6,000 support network and customer service staff ‘to deliver sustained improvement in customer experience.’

This has yet to take effect, as comes through clearly in Kathy’s story. Kathy is a close colleague of mine and wrote to me recently to tell me what happened when she had a problem with BT.

Hi Miti. This whole sorry saga came about over a problem that happened BT’s end when I tried to upgrade my daughter’s mobile phone. I placed the order on a Saturday, over the phone talking to a really pleasant and helpful man, and expected it to arrive on the following Tuesday. However, when I didn’t get a message to let me know what time the phone would be delivered, I became suspicious. So I checked my online account only to find that the order had been cancelled. By BT, not me. And they hadn’t made any attempt to let me know.

When I rang to find out what had happened I was on the phone for one hour and 58 minutes, can you believe it! Most of that time I was actually on hold as they kept passing me back and forth between different departments. They spent more time talking to each other than to me. It seemed like they were more focussed on their internal problems than that my teenage daughter was in danger of being without a mobile phone.

At one point I was told that a potential delay would ‘not be an issue’. While it may not have been an issue for them, it meant my daughter could have been without her phone for even longer. So definitely an issue for us, from both a personal and a safety point of view. That ill-thought-out comment did nothing to help my mood or feelings about BT!

The one helpful person who said she would sort it out for me (although she didn’t) also said she would raise a complaint on my behalf. A few days after this I received two copies of exactly the same letter. It was signed by Libby Barr, BT’s Managing Director for Customer Care. The letter was a general template which I guess they send to all their customers. It made no reference to my actual complaint or the steps they were talking to resolve the issue. While it did invite me to get in touch if I needed any more information (which I did) it only gave me the general 0800 complaints number and I wasn’t prepared to get embroiled in their infuriating phone systems again.

The following day I received an email which didn’t give me any different information to the previous day’s letter. Oddly the email was from Nick Lane who apparently is also BT’s Managing Director for Customer Care. Nick suggested if I had any questions I should get in touch online and included a link so I could do this. He didn’t share the telephone number though. BT do seem very unsure about how their customers should contact them.

A week or so later I received another email from Nick Lane saying thank you for getting in touch and that, as everything was now sorted out (it wasn’t), they had closed my complaint.

The very next day I received a letter from ‘Customer Care’ (there was no name on the letter) saying they had tried to call me (they hadn’t, at least not on the number I asked them to call me on). The letter said that if I was now happy (I wasn’t) there was no need to do anything and they would close my complaint in 28 days.

Throughout all this confusing communication I did nothing. I’d already cancelled my daughter’s contract with BT, bought her a new phone and taken out a new contract with another company. I had neither the energy or the desire to enter into any more correspondence with BT. To be fair, I don’t have any complaints about their products. But I live with a constant dread that something will go wrong and I’ll be sucked back into another nightmare scenario trying to sort it out. They are so hard to communicate with I can’t face it anymore, so I won’t renew any of my other contracts with them. And I’ve been with BT all my adult life.

Wow! What a story and a dreadful reflection of what should be a British company we can all be proud of. Where to start?

When people pick up the phone to report a problem they want to speak to a person who can help them. They want the company they’re calling to take responsibility for the problem and sort it out quickly. They don’t want to be passed from department to department, having to retell their story each time while they repeatedly hear I’m sorry, I can’t help so I’m going to pass you to department X who can.

What I’m saying isn’t new. It’s not some brilliant insight I’ve just come up with. It’s something we all have experience of. And that none of us like. So why does it persist?

Part of the problem is that BT is too big. Its structure is so complex it can no longer serve its customers effectively when something goes wrong. I’ve written before about companies who grow beyond around 2,000 employees. At this point they seem to lose the ability to communicate in any meaningful way, with both their customers and their staff.

However, you can avoid this if you remember one thing. The people who work for you are human beings, not machines. They’re relational, with a fundamental need to make genuine, human connections. They need to think, feel and do. They need to use their brains and enjoy the mental rewards that come with accomplishment. They need to feel valued, rewarded and inspired by their conversations with other people.